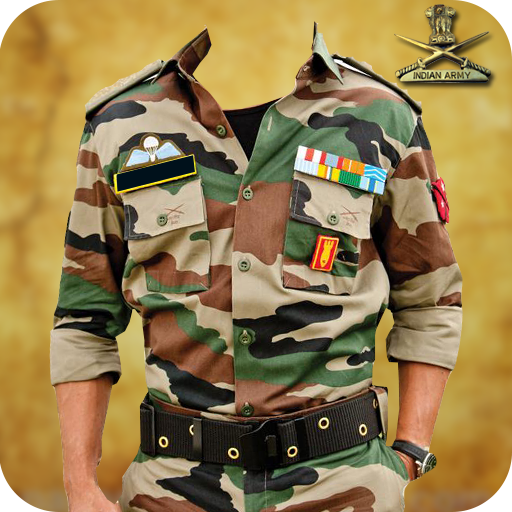 If you want to add unusual color filters, frames, write text or enhance skin color, use one of these Top Free Photo Editors App for Android. They’re absolutely free, without hidden ads, and have a user-friendly interface for inexperienced photo retouchers.

Here you can see how you look in these clothes if you purchase these suits from market. So you can easily get an idea related those wear clothes or army dress. New Indian Army Photo Uniform Editor - Army Suit maker provides a different type of army suits for both male and female with several colors and sizing. By mean of this Indian army photo editor entertain yourself with family and friends by army suit editor and pick up the best Indian army suit which fits your personality and show yourself as army man. The man army dress photo suit editor is one of the best India police photo frames app. India military photo maker is actually made for those people who love army uniforms and Indians arm forces like Indian navy, Indian air force etc.
This is best suit photo editor, army suit photo frames, Indian army photo editor app for android OS in all over the world.
Manage your photograph with Indian army suit editor and consider yourself as brave and skillful military army man.
This is an aspiration for all Indian citizen that he or she grew and will be an Indian army soldier or officer and do hard work to get a position in Indian military.
We made indian army photo suit editor application for those who wish to be in Indian army dress photo suit and wish to become a good Indian army brave man or even indian police or soldiers
This Commando Suit photo editor is a latest smart phone photo editor app. It’s a one of the best free android photo editor apps, having Collection awesome suite dresses for both male and females.
This Suit Changer Photo Editor is a Mobile fun app, specially made for people who love to take more photos in Indian Army dressing.
Photo Editor is an effect of different styles of international army.
If you love to wear army uniform or want to see your friend in army dress to see how you ‘ll be looked in any country soldier uniform.
No need to purchase the indian army Uniform, everything is ready in this dress changer photo app for you. Just take a photo from your camera or customize to select many photos from the gallery and start editing and make yoursefl as brave army man commando.
After selection or capturing photo with camera u can apply any indian military Suit uniform to your photo.
This App allows you to Captures a photo through your mobile camera or Choose picture from Gallery and gives it a indian army Look.
Indian army suit editor 2017 is ordinarily free smart phone army suit change face app which often delivers HD army costumes collection. If you ever wish a dream to become an army soldier after that this particular indian army photo frames app can make your wishes true. indian army suits are particularly recommended for you.
A lot of indian military suit photo frame is definitely given in this army suit editor 2017 application.
This military indian army photo suit editor application produces a remarkable picture simply by wearing army suits to get images. Mobile pleasant app, specially planned for those who like to take a lot more pictures within Commando or military mastery dressing up.

FEATURES:
- Easy to use and apply New India army suit.
- women army suit are also included
- Very stunned and clear HD army montages
- Take a photo from the photo gallery or get photographs using the phone's camera.
- Click one by one picture and pick the favorite one.
- More than 20 photo suit designs are offered.
- Save your image to the SD card.
- You can send the photo with police photo frame to friends.
- work totally offline, no internet connection is required

Download this Indian Army Photo Suit Editor - Uniform changer application that easily available on market free and make your boring photos memorable.
Give us a rating and inform from your good suggestion in order to improve our work. we will made all those changes in it which you people refer..