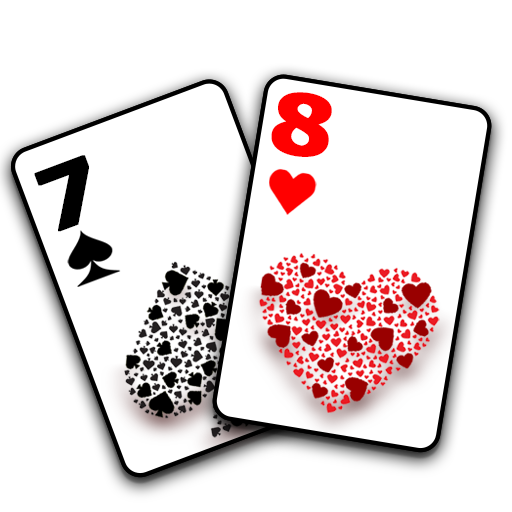 78 Card Game is a traditional Indian card game commonly known as the Indian satti atthi game.
Card Game 7 8 is a popular card game played with a stripped deck of 30 cards. The cards used include all ranks from 8 onwards for all suits and the 7 of Hearts and 7 of the Spades. It is a trick-taking game where there are 15 possible tricks. At the start of the first game, it is decided randomly who will select the trump. After the first game, both players alternatively select the trump. In this trump card game player who selects the trump has to make more than 8 tricks to win, while the other player has to make more than 7 tricks to win the game. If the player who selects the trump makes 8 hands, while the other player makes seven hands, then it is a draw.

The first lead is by the player who selects the trump, while subsequent ones are by the one who wins the trick. On each trick, the highest of the led suit wins unless it is trumped. The trump suit cards have the highest rank and are used to cut other cards when a suite played by the other player is not available. The game ends when all 15 tricks have been played.

Indian Card Game 7 8 Rules
♠♥ Selection of the Trump
• A total of 5 options are available (4 suites and 1 pass option) to choose from.
• Pass option: The pass option allows the player to randomly open two out of the five set of cards.
• If both the cards belong to the same suite, it is declared as the trump suite, otherwise the suite of the card with a higher rank is chosen as the trump suite.

♠♥ Dealing of Cards
• A set of 5 cards, each is dealt with the player who will call the trump and the opposite player, respectively.
• 5 cards are put face down in a sequence, one beside the other in front of both the players. These cards will not be seen by them at the beginning of the game.
• Another set of 5 cards with their face up are dealt to both the players and are placed on top of the closed cards.
• The closed cards will be seen one at a time after the card face up, placed on top, has been played.

Features:
- Achievements: Shows game stats of game achievements by the player.
- Daily Quest: Daily new quest to make the game more exciting.
- Daily Reward: Get rewards by playing the game daily in a row.
- Custom Table: Enables users to select a limit of table/coins.
- Wifi Mode: Play with friends connected on the same wifi.
- Lucky Wheel: Try your luck to win up to 1000 coins. Daily one spin.
- Player Avtar: There are 100+ avatars to choose from for your player id. To choose an avatar, click on your profile photo and choose one from the given.
- Themes: 5+ card face to select from, 40+ card shirts/backs to select from, and more than 15 game backgrounds to select.

How to Play 78 Card Game
♠ Choose "play Now" to get started. Now randomly, it will be chosen that who will select trump.
♥ In the next round, the alternate chance will be given to select trump. This is the offline mode.
♠ Enjoy playing a 7 8 card game.
♥ If you want to play with your friend, choose "Wifi 1vs1" mode. You and your friend must be in the same wifi zone. One will have to choose a host(the one who creates the table), and the other will have to choose to join(your friend). If you have hosted the table, then you will get the opportunity to select the trump suit.
♠ The winner will earn coins.
♥ If you want to choose coins/table limit, choose "Custom Table" mode. You can select a limit for both offline mode or wifi mode.