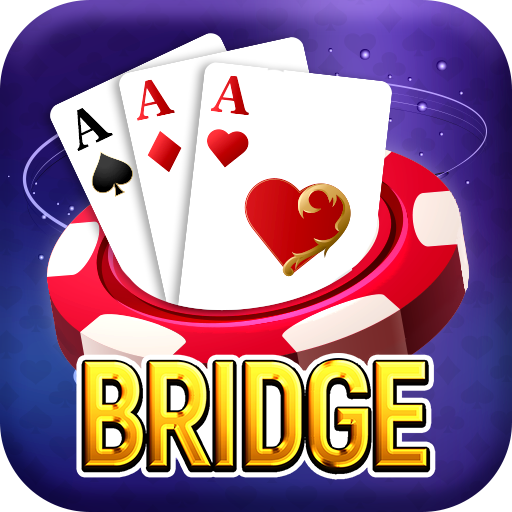 Bridge, card game derived from whist, through the earlier variants Bridge whist and auction Bridge. The essential features of all Bridge games, as of whist, are that four persons play, two against two as partners; a standard 52-card deck of playing cards is dealt out one at a time, clockwise around the table, so that each player holds 13 cards; and the object of play is to win tricks, each trick consisting of one card played by each player. Another feature is that one suit may be designated the trump suit (i.e., any card in that suit may take any card of the other suits), but the methods of designating the trump suit (or of determining that a deal will be played without trumps) differ in the various Bridge games, as explained below.

Set Up
Before the game begins, an initial dealer must be chosen. To do so, every player is given a card from a shuffled deck and who ever receives the highest card becomes the first dealer. Ties are broken by a repeated deal. The initial dealer shuffles the deck and the player to their right cuts it. The dealer then passes 13 cards one by one clockwise to each of the 4 players.

The dealer position rotates clockwise at the end of each round.

Teammates sit across from each other and work together to make bids and win tricks.

Auction
Before the gameplay commences, players, starting to the right of the dealer and going clockwise, enter into an auction for the round’s contract and decide to either Bid, Double, Redouble, or Pass.

Bid
A bid represents the number of tricks the team expects to make along with the trump suit they desire for the round. The minimum bid is 7 tricks, while the maximum is 13. For example, if a player makes a bid of “One Heart”, they expect to make 7 tricks. A bid of “Two Hearts” is 8 tricks and so on.

If a player passes, they decide not to make a bid, redouble or double. The auction continues to each player until all players have passed on the highest bid. The highest bid (in terms of suit ranking and number of tricks bid) becomes the contract for the round.

The gameplay officially begins when the Declarer lays down the lead card. Going clockwise, the Defenders try to out rank the lead. A player must only play cards of the same suit as the lead card. If they do not possess cards of the same suit, they may play any of their cards in an attempt to win the trick. The winner of the trick places the next lead and the gameplay continues until all cards are dealt. Tricks won should be collected and placed faced down on the side of the winning team.


Scoring
Each trick over 6 tricks is worth a certain number of points depending on the trump suit. A team wins a game after scoring 100 points. The scoreboard for bridge is generally divided into two columns (one for each team) and two rows. The bottom row is for points won by making tricks while the top row is for bonus and penalty points.

Download Bridge free games which is a terrific best Bridge offline card game that you're sure to enjoy.