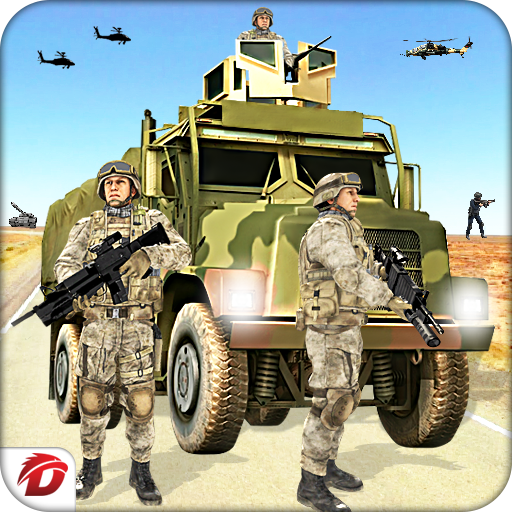 Soldiers are for the battlefields. They have enough time to reach army check post. In this military truck driving game your aim is to drive a real army truck and help commando’s to fulfill their mission. Your main role is to pick & drop them to the army check post from the army base camp. An adventure drive will start whenever you will start army truck monster. Tap button to speed and get ready for thrill of mountain truck driving & forest truck driving. Drive around the forest, desert, jungle, mountain is not easy. Being a soldier truck driver you have to put your driving skills.

In this game there many realistic environments like mountains, hills, forest, snow, desert, jungle, all are 3d environments. You have to prepare yourself as US Army Truck Driver for a battle war.
Army Truck Driver Cargo Duty game Levels:
We designed more than 8 different missions for you. In each level there are different challenging mission levels for you. The controls of Army Cargo Truck such as brake, steering, acceleration and wheel is realistic and smooth with different camera angles. When war start it’s your duty to drive army war truck driver and pick and drop military force to their destination in mission. Playing as pk army truck driver is a hard missions. You have to complete missions within a limited time.