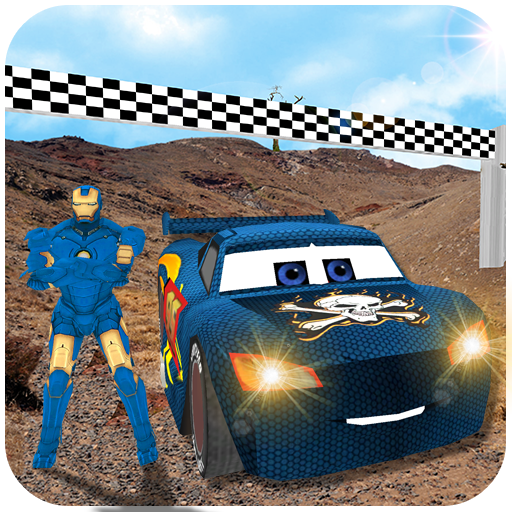 Are you ready for the fanatic nitro power cars stunts with your terrific superheroes? If yes, so why you are waiting for?

Extreme Superheroes Racing Car Stunts racing simulator contains Special vicious tracks mania with bulk of deadliest obstacle that are daring your superheroes. Performing stunts on mountains track is not an easy task, your luxury turbo car will be blast if you collide with the hurdle. The blazing nitro power of car with airspeed on impossible tracks fascinates the stunt lovers. Do not lose control while using the nitro power, and beware from blindsided rocks attack.

Enjoy the best stunt league championship in Extreme Superheroes Racing Car Stunts racing simulator that contains the breathtaking and fascinated missions to play. You have beautiful car garage environment, where you choose your favorite superhero as well as lightning blazer nitro car for stunting. 3D off-road mountains and slippery tracks with bulk of world dangerous obstacles made this game impossible. In each mission, the number of collider increases gradually and the game mission become more fascinated. Different blindsided obstacles like moving iron balls, deadliest drains rocks, iron poll upper moving hammer, punching hammers, and vicious iron bar ring made this game crazier. Use nitro power carefully, your turbo speed will cause any serious disaster for your superheroes. Beware from colliding with the maneuvering obstacles otherwise, the aftermath is blast of your luxury rocket car. Show your incredible and angst stunt to fascinate the people and get more score in this Extreme Superheroes Racing Car Stunts racing simulation. You can easily unlock the other funky cars and super heroes like, daring Iron Hero, armored Captain Hero, and devastating Spider Hero to play.

Mostly stunt games lovers enjoy the stunting but in this Extreme Superheroes Racing Car Stunts racing simulator you have to mess with the vicious obstacles too. Being a rookie, show your stunting skills become famous stunt master. What are you waiting for just grab the incredible Extreme Superheroes Racing Car Stunts racing simulation and fulfill your fanatic desires.