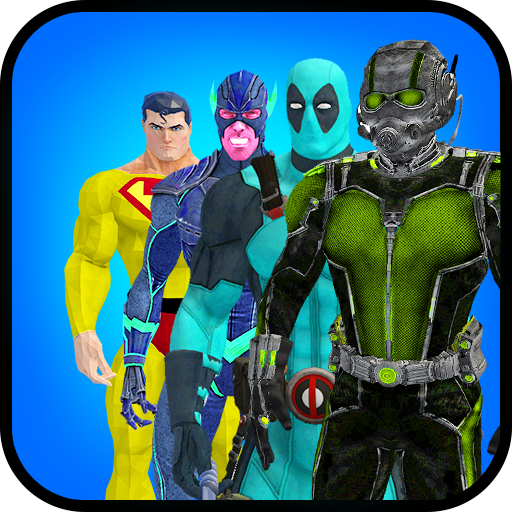 Grand Ant Flying Hero City Battle is not another game with the super Hero’s fighting the Crime Battles along with the a Great Villain, but this is the most epic Hero Vs Hero game of the time in which your favorite heroes will be facing their most darkest fears of fighting the other Super Hero. Live your most demanded stories ever. All your favorite heroes fighting each other and surviving. All your childhood heroes are in Grand Ant Flying Hero City Battle with unseen super powers. Grand Ant Hero, Dead Hero, Super Hero and Light hero have teamed up to join their powers to fight the other Super heroes that have turned in to Super Villains as they have started destroying the city. The Anti-Heroes need to be stopped before they destroy the city and all the civilians living in the city. Game Play: Play as the most wanted heroes of ages and use their super powers to stop the Anti-Heroes Super Villains like Fantastic Villain, Super Hammer Villain, and Captain Villain. Even Super Anti-Heroes Villains have their own Super powers that can be really harmful to you so be careful. Every hero has its own super powers, some can fly, some can fire Lasers from their eyes and some can also change their size as well. Ant hero can become so small that it can even ride an ant. He have the super power of its suite and can be really help full to fight the city battle. Save the city from the Monstrous Super Villains of the vice city in the most amazing game of the year Grand Ant Flying Hero City Battle. Super hero have its strength and laser emitting Eyes to kill and destroy your enemies of the city. Use your strength and powers to save the city from the most power full Super Villains of all time. Make sure you fight with all the Antihero Super villains in your way to save the city and civilians living in the city. Be the hero your city need in Grand Ant Flying Hero City Battle. Dead hero is also there to help you in saving the city from these monstrous heroes who have turned out to be the most dangerous Villains off all time. Dead hero can be very dangerous with his swords. Help the city and help your fellow Heroes to end this battle once for all. Dangerous Hammer Villain, Fantastic villain, amazing Spider Villain, Turtle villain and many more are trying to destroy your city with the dark powers they have. Stop them with the powers you have with in you, you are the city’s last hope. Key features: • Be a Grand Flying Ant hero and Fight with Super villains • More than one hero to play. • Open world gamming Scenario. • Epic Battles and Most Incredible Super villains to fight. • 3D graphics and HD Sound effects with the most realistic fighting combos. • Play the thrilling levels in the incredible hero fighting game. • Three different skins for every Hero. Grand Ant Flying Hero City Battle is thrilling game for all ant hero lovers and super villains fans.The time of extermination is near as all the Super Heroes have turned their faces away from the city and have transformed in to the Anti-Hero Monster League. The Sky have opened the Gate of heroes in Grand Ant Flying Hero City Battle game.