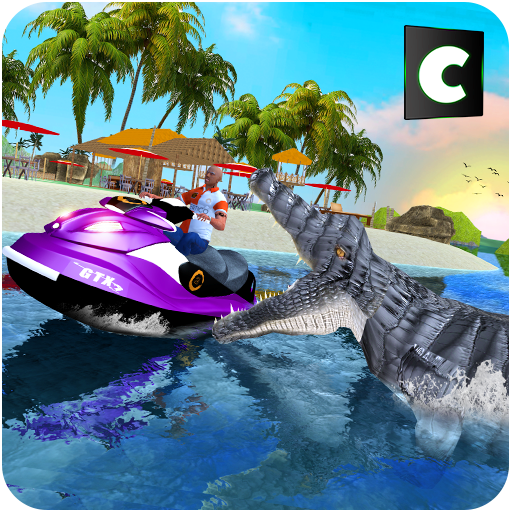 Welcome to a new era of crocodile 2k18 new game action & adventure where you survive in Deep Ocean as well as beach environment while playing Hungry Crocodile Water Attack Simulator. Play as hungry crocodile and fight with dangerous shark in blue sea with the help of your bite attacks. Choose your favorite hungry crocodile and wandering in the dark sea as well as beach with the help of super powers like fireball attack. . Beat your rival like water divers as well as Jet Ski driver. You can eat and hunt everything which comes in your way.

Hungry Crocodile Water Attack Game is an amazing thrilling and action gameplay where you can play as a wild crocodile. Angry Crocodile Water Attack is interesting game with challenging water environment where you play as hungry crocodile and survive in the water. Fight with the more dangerous animals and show your best hunting skills to make more score. Use your special attack like powerful jaws and sharp teeth’s to defeat your enemy. Action and thrilling game is ready to blast the game in sea as well as beach survival gaming world with the help of realistic wild crocodile skills.

You can survive and fight with wild killer sharks as well as Deadly scuba Divers who are wandering in search of water crocodile. Save your alligator friend who is stuck in the cage in deep water. Hit the cage with the help of special power and break it. Use your super crocodile speed to destroy Jet Ski and save your life from angry wild hunter. You are water wild beast, grab the swimmer as well as scuba divers and rip them apart. You can feel and smell your enemies who are wandering near you in the sea. Complete your hunger as fast as you can before you hunted by your water rival enemies.

Get ready to enjoy endless fun in this Hungry Crocodile Water Attack Game and beware from wild shark, sniper divers in the crocodile survival game. Complete all the levels while playing this simulator. Increase your power skills, stamina and strategy to live the life of a hungry crocodile. Beat your rivals to get more score in this Hungry Crocodile Water Attack Game so that you can easily unlock the other wild crocodile. Amazing missions are waiting for you to play as wild crocodile.