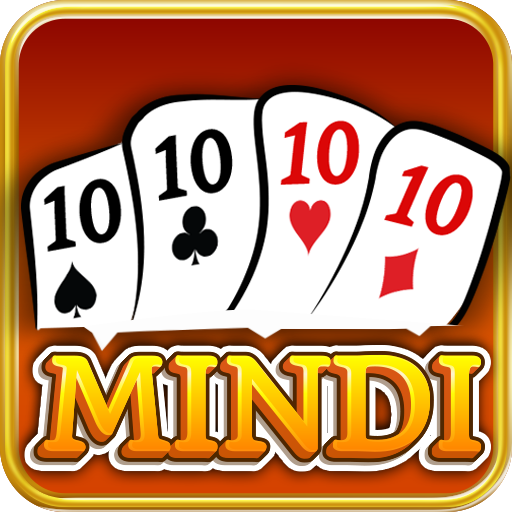 In North India Mindi/Mindicot is known as Dehla Pakad. Mindi is one of the most popular desai game that is, trick taking and time passing game, well-known in India. In India people love to play Mindi or we could call it as mendi, they play Mindi for countless hours with their friends and families. Mindi is for smart and tricky people, this Indian card game needs some strategy to win it.
Mindi gives you unique experience every time you play it. Mindi is popularly called an exciting card game. Mindi is easy to learn. It is a team game and the ultimate objective is to win maximum no. of 10 numbered cards(10 of spades, 10 of hearts, 10 of diamonds, 10 of clubs) for your team and complete as many koats(coats) against the opponents.

Mendi game in India is also popularly known as Dahar games or Hukam. Different group of people call it with different names or it sometimes also been called by the way it is played, for example the local people out there call it tase ka game or panna, while others call it by the game name. Meet this amazing, cool desi game Mindicot, on your mobile.

Rules to. Keep in mind
Mindi is designed for four players playing in two partnerships. The game uses a standard 52 card deck. The ranking of the cards in this deck are as follows (from high to low): joker (wild card), Ace, King, Queen, Jack, 10, 9, 8, 7, 6, 5, 4, 3, 2.
The game has 1 deck mode, 2 deck mode, 3 deck mode and 4 deck mode.
Each mode has two sub modes "Katte Mode" and "Hide Mode".
Hide mode - The player to the dealer’s left selects a card placing it to table face down which will be declared as trump suit for that play.
Katte mode - Play begins without choosing trump suit when the player is not able to follow the suit then whichever he/she chooses becomes the trump of the deal.

Deal
Deal and play are clockwise. Dealer is chosen by dealing random card and one who’s having highest card deals first. The dealer deals out all the cards, one at a time, face down, so that each player has 13 cards. The players pick up their cards and look at them.

How to Play
The player to dealer's left leads to the first trick, and subsequently the winner of each trick leads to the next. All player must throws same suit card, until he don't have a card related to that suit. When player do not have a card related to same suit, A card considered as trump. The main objective of game is to collect maximum number of Medi(Dehla). Declaration of trump depends on mode of the game. If you are playing "Hide Mode" then you need to face up a card which was face down at the time of dealing and whatever a suit will be in a card is considered as trump. If you are playing "Katte Mode", then any player can declare trump. A player who runs out the card of any suit, which hand is playing now, can declare trump. Thus, once a trump suit is selected for the hand, the highest card of the trump suit played to the hand, wins the hand. If no trump card has been played to the hand, the highest card of the suit led wins the hand. The winner of each hand leads the first card to the next hand. Each captured hand should be kept in a face down pile of cards, gathered by the winner of the hand. At the end of the game, a player who has higher no of Mendi(Dehla), will be declared as winner. When a tie occur, at that time, hand will be considered to declare a win

Advance Features:
- Achievements: Shows game stats of game achievements by the player.
- Remaining Cards: List of cards left for the round from the deck.
- Multi-language: Supports Hindi, English and Gujarati languages.