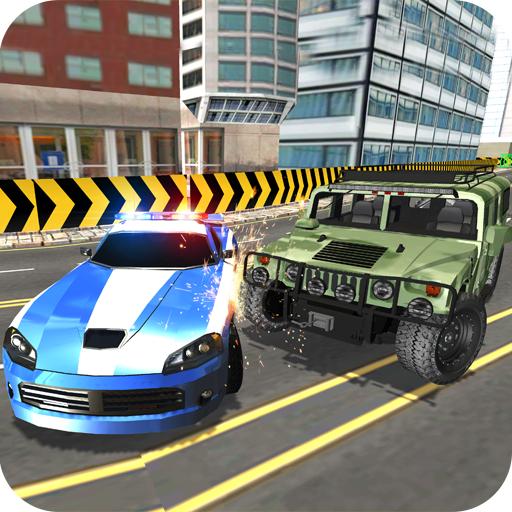 Are you ready for the extreme racing contest between the army and police department? If yes than let the race begin in Police vs Army Street Car Race game. Beat your rival department and become finest champion in police van driving game. This racing car game is for all age groups, who are die-hard fan of the cops racing games. Burn your car tire and beat the enemy’s vehicles with your driving skills.

Smash the rival’s car and clear the finishing point before the opponent to win the racing contest in Police vs Army Street Car Race game. Do not bump with the deadly hurdles while driving military 4X4 cars that will reduce your extreme speed and in the result you will lose the military jeep race. Beat the time limit to get the highest score and become the best cop’s sports car driver.

Enjoy the extreme Police vs Army Street Car Race game that contains the fabulous street car racing contest for the military car smashing game lovers. Drive your favorite police racing car and boost your military racing vehicles for the famous police vs military challenging race. In this police chase game, cops cars or military vehicles will try to destroy your police jeep on the racing city track, escape from them and clear the finishing point. For the first time military and police department is ready to challenge their racing skills on the racing track that will give you a lot of entertainment and thrills. Become winner of the extreme race to get more score in the military chasing game so you can unlock the other extreme military vehicles.