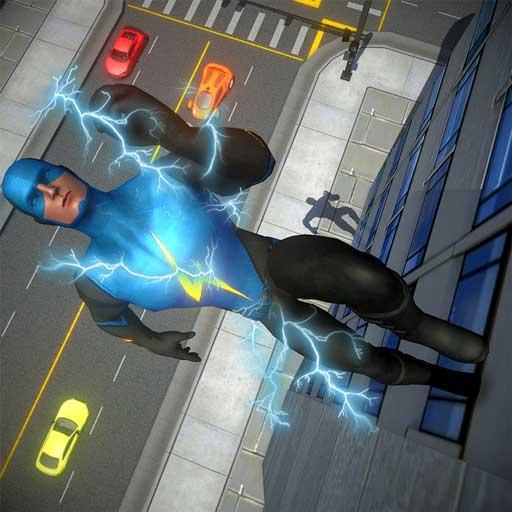 Play the most exciting super heroes action game of the year with light speed hero. The flash speed man will run with the speed of light to capture and kill the gangsters trying to kill the innocent peoples. Start fight with the criminals and rescue people from the gangsters.
Super speed hero action game for kids possesses the powers of wall running, building climbing, tornado speed smashing, flying super hero powers and fast running as the fastest man alive in this best crime simulator of Miami crime city. This fighting game
for kids entertain you with the high voltage action drama while fighting with the criminals.

Most exciting 3d fighting game thriller super light speed hero will help people and rescue them to the safe place. If you love to be the fastest man alive participating in the grand wars of auto theft games and real action of crime mafia gangsters then don't miss the opportunity to get the best super hero games and real crime simulator games. Be ready for super hero combat or adventure fights with city battle & action to destroy the evil enemies by making the best ever fighting approach in the most addictive flame super speed hero simulator or superhero games 2019.

This is a Real Light speed Super Hero 2019 - Rescue Mission Game is a no task for ordinary super speed robots. Life of a super robot light hero from one building to another at flash speed, rescue animals and super hero robot fighting crime; is a true Mayday thriller. Action game will let you the know difference between speed doctor robot and flesh superhero.

Play the most thrilling fighting game of 2019 with friends to combat with the evil criminals. Grand robot Flying simulator superhero City Rescue Mission as a flying super robot steel hero legend, you must be able to save people and injured animals in amazing action simulation game. There may be a high-security alert, monster animals attack and a combat between us army force and deadly animals where your help would be needed. Be the fast speed robot warrior flying simulator superhero rescue robot legend in action simulator and to help the police force in fighting with against the monster Gangster.

Grand city robbers and criminals of Miami city real crime simulator must bow down before you or get killed with no other option left for them. Utilize light speed hero ability and eliminate the crime city gangster gangs in no time.

⚡ Kill the gangsters in the town with speed booster and punches.

⚡ Use power booster skills to kill the Miami Gangsters.

⚡ The story behind every scene along with the history of the super villains.

Play and have fun with this action packed flying simulator light speed hero game. Give us feedback to improve the quality of the game.