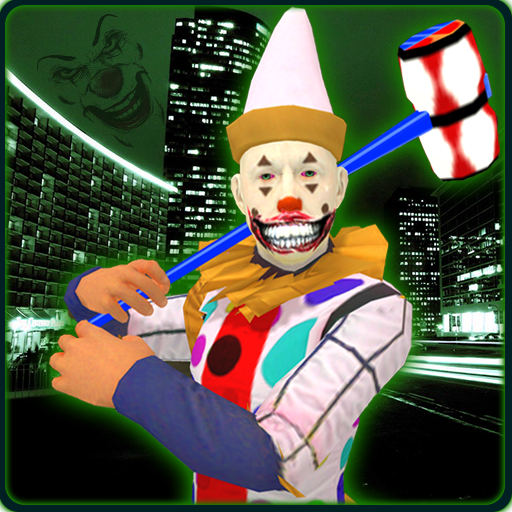 The Halloween day is over, but this scary clown sighting is just starting now in the grand city to scare the gangsters at night in this Scary Clown City Attack. Everybody in the world like scaring but this dangerous thing by the killer clown gives you a surprising experience. Best crazy funky costume of clown are ready to play with, grab your costume and fight with the dangerous gangsters of the vice city. The scaring city night environment gives you the feeling of darkness moreover you have to fight with the street criminals that are planning something really dangerous.

Scary Clown City Attack action simulation is specially designed for the creepy clown lovers. The night city environment and the amazing clown role made this game to the best clown game. The killer clown having the Thrilling and terrifying attacks powers like hammer, combos, as well as multiple fires capabilities. The creepy clown can transform into funky car and also hit the criminals by the car. You have to chase the criminals, fight with them to remove the crime from the grand city. The criminals are ready to attack on you by the different martial art skill as well as by the heavy gun fires.

In the Scary Clown City Attack simulation you can play as free mode as well as in story mode. In free mode the street criminals, dangerous gangsters is waiting for you to fight. You have to be volunteer while searching the dangerous criminals, they can comes in your from anywhere. On the other hand in story mode you have to complete the impossible missions step by step. With the hammer and multi firing capability you can easily destroy any criminal. Best smooth controls and the amazing fighting combos are also provided. Kill more criminals to get more score, so that you can easily unlock the crazy costume of the clown. You can also prank the civilians in the city with your funky activities. You have to show your best fighting skills against the opponents, scare the robbers by your killer hammer.

Enjoy the best action Scary Clown City Attack simulation to play, where you have to fight against the dangerous agent mafia, gangsters and with the street criminals. These criminals are planning something really dangerous, the people of the vice city really need your help. Go and kill them with your scary powers like heavy hammer attack. Scary Clown City Attack simulator is ready to make blast in the gaming world.