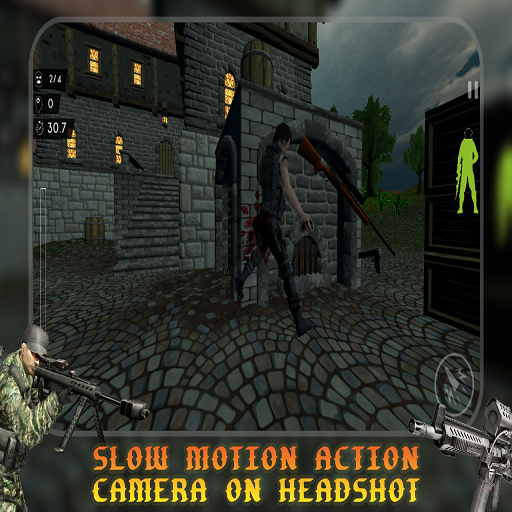 Your enemies are spread everywhere to attack the entire city with modern weapons & guns. Get ready to counter shoot these lethal terrorist special force & deadly criminal assassins with your amazing sniper shooting gun. This game is a reality like experience of sniper shoot fight as a military commando army soldier shooter on a special ops mission in the heat of war action. Your primary objective in this special ops mission is to kill all the deadly criminals which won’t be easy as they are also equipped with modern weapons, gun & sniper shooters. But that shouldn’t be a problem for you as you are an elite military commando sniper & army shooter with all the required stealth, survival & war combat skills to win this war & successfully complete this special ops sniper mission. Get yourself in a stealth action mode to counter attack & kill the gangsters in this dangerous battle. There will be barrels around which you can blow off & use to your advantage to kill all the deadly criminals. You are highly equipped with latest sniper guns so be a true war hero to end this genocide. Detect and find every single deadly criminal from hidden locations to end this battle & win this war. Time is very limited so don’t allow your enemies to escape or counter you attacks or strike at you.

Experience the most awesome sniper killing game. Hold your breath and shoot your enemies by pulling the sniper trigger. Hide and make a shot before they see you and counter attack you with their guns. Aim for the head shot with this ultimate sniper gun. Become a killing machine by finding your enemies in desert and shooting them. It’s time for action in war, let’s see what you got. Get rewards for eliminating your rivals in this stunning fps game. Be the best sniper, join others in this game and shoot to kill. Aim at the target, breath held in, to become the silent assassin mission military commando. Sniper shooting skills of warrior; become the trust of the leaders and generals. Sitting in their cozy meeting rooms, planning ahead the future of the war, make them worriless of the current war dynamic and plan ahead to beat the enemy strategically. Next is your turn to attack their borders. With the sniper gun perfection take the head shots at the enemies. High tech weapons, heavy military gear and the vastness in their numbers have fooled the enemy with the thoughts of superiority and a sure conquers of the border. Victory does not stand with the evil longer. To be eliminated and destroyed by the Border army sniper single handedly, their fate has chosen the day to meet them & wiper their existence off the earth.

Sniper you geared up with system weapons, sniper rifles, rocket launchers and hand grenades. Best looking instances Powerful system guns and devastating missiles to slay hordes of enemies. Iron pressure Ready to kill shot! Destroy all the ones peoples who are status it way of a non-violent world. You may be face army truck, armored cars and navy tank then you needs to break them with the rocket launcher. Leave no enemy in the back of. Shoot Hunter stop breathe and think Patrolling Enemies equipped to kill you, you need to keep yourself and maintain eye on them additionally watch tower solders in you’re a success complete venture. Prepare the assault and get ready to kill the attackers. It is time to load out your fire hands. Top free games Vikings: warfare of clans Shoot Hunter three-D gun video games without cost this war of mine fallout safe haven current war Shoot Hunter Killer cell strike action video games.