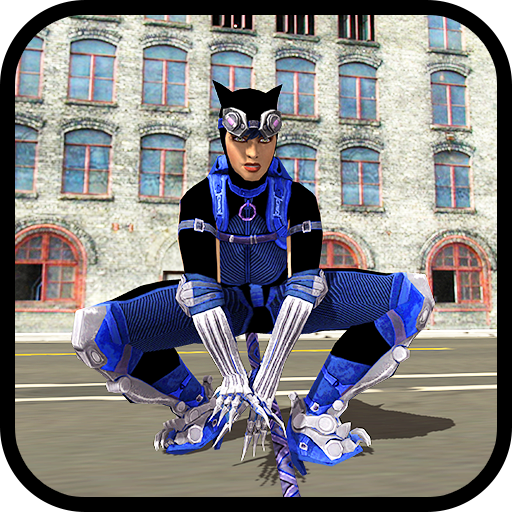 Super Cat Girl Crime Battle is not another game of fighting against the gangsters. But it is the story of a simple women who became a Super cat girl. And how she helped her city against the crime with the help of the powers given to her. Fantastic Crime fighting game with a lot of actions and fighting scenarios. Thugs robbing killings and kidnapping the civilians and the gangster Boss The Fantastic Villain will be fighting against the city last hope Super Cat Girl.

A simple women became a super Cat Girl after baited from a cat with super powers and that will turn her in to a furious blood shadier crime Battle Machine. She will have the Super powers to fight the crimes as a Super cat girl. Super Cat Girl Crime Battle against the crime will lead the city to a Bright future and will bring peace in the city as there will be no crime in the city. Cat women will be the new hope to the city full of crimes and gangsters thirsty for blood and killing people for fun as well as money. City need Super Cat Girl to fight against the crime and the gangsters and their boss The Fantastic Villain.

A regular women of the city was walking down town to grab some stuff from the super market. A cat appeared from no wear and attacked her from behind and the girl fell. It was strange to her as she have never heard of cat attacking any human before. She woke up as a Super Cat Girl. Along with the super powers she would never have imagined before. She can feel the power within her in this Super Cat Girl Crime Battle. She knew from the start what will she do with these power for. She started to fight the crime in the city and fight the gangsters and kill them for the good of the city.

As a new hero arrives in the city there was a huge blast in the galaxy Zionaid and the huge meteoroid strikes the earth. It was not just a meteoroid but a real alien named as Fantastic Villain. He has arrived in the city with the plan of controlling the all the malevolent minded people with his supremacy over the mind. Now he is in the control of the evil group of gangsters.

Super Cat Girl need to eliminate all the gangsters first to fade the power of the Fantastic Villain. Cat women is using het Claw Attack tactics to fight and also fire flame balls from her hand. Once all the all the gangsters are dead she kills the Boss Villain. She can also use her power to shatter the ground under her enemy’s feet.