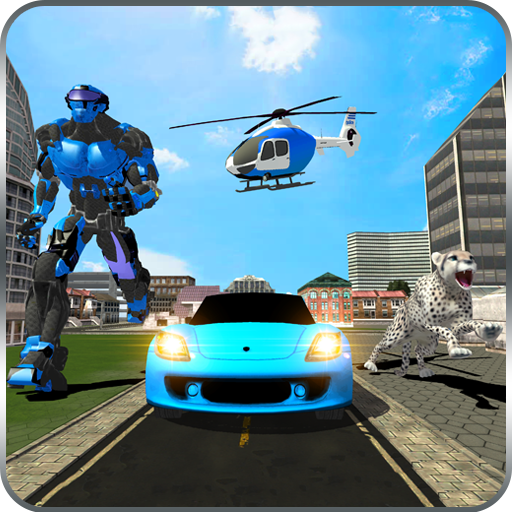 Introducing first time the multiple robot transform game like Tetra Cheetah Robot Car Transform Helicopter. In this tetra game, you are going to play as a futuristic war robot, fast robotic cheetah, robotic car as well as the armored helicopter to save your city from the evil machines. In this fictional game, the mechanical machines are making confrontations with the innocent civilians they are demolishing the grand city like, destroying the building, kidnaping the civilians as well as smashing the traffic cars. Unlike the other robot games, robotic car game, robotic helicopter game and robotic cheetah game, here you will find all demanding players in a single robotic simulator like Tetra Cheetah Robot Car game.

The evil machines are ruling the grand city and they are going to make this beautiful city into dead city in Tetra Cheetah Robot Car Transform Helicopter. US police and rescue forces are fail to stop the evil robots. The scientists of the world made your body with modern iron material and well programmed to survive in war situations. By transforming into helicopter, you have to rescue the civilian from the skyscraper buildings. Fight with the tactical machines and robotic gorilla monster, transform into mechanical car to destroy the rivals. 3D city environment and deadly war battle in the grand city made this game crazy.

Get ready to be a part of robotic fiction battle in Tetra Cheetah Robot Car Transform Helicopter game, where you can transform into multiple robotic player. Choose your favorite tetra robotic team to fight against the deadly gorilla machine and the robotic machines. Transform into robot helicopter fly in the air, made battle against the war helicopters. Armored helicopter can spit multiple fires on the enemy and will help you to rescue the civilian from the fire catching buildings. Transform into robotic cheetah will help you to catch your enemy with your powerful jaws, also can fire on the rivals machines. Your war transform technologies having the ability of messing with any war robots and gorilla robot. The evil robots and gorilla robots are destroying the whole city you have to help the civilian. Playing as war robot machines, you will attack on the rivals with the help of powerful fires, and aggressive martial art combos. Transform into robotic car will help you to chase the rival’s cars and destroy any enemy by smashing with your robotic car. Amazing 3D environment of grand city and amazing fantasy of tetra robotic transform team will give you the fabulous experience you have never enjoy before. Show your strategy and fighting skills against the war robots to save the city from the evil robots in Tetra Cheetah Robot Car Transform Helicopter game. You can easily unlock the other powerful tetra robotic teams by making more score in this robotic battle game.

• Choose your favorite tetra robotic team to play.
• Transform into robots cheetah, robot, car, and helicopter.
• Incredible animations and cool sounds effects.
• Each robotic players having their own attacks.
• Fight against the evil robots and gorilla monster robot.
• Fictional and addictive gameplay.
• Fly the robotic helicopter and made air combat.
• 3D graphic and battle city environment.