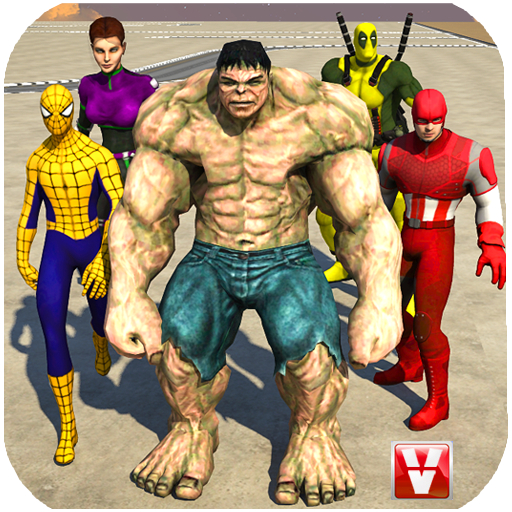 You were on a Incredible superhero secret mission, stealing the important information about the enemies, the army base camps, rebels and the underworld Mafia, But they saw you now Gameplay of this this superheroes robot game is pretty simple, you will fight against other Robots, police cars, army tanks & get rid of Police cars and you have to defeat them to get access next level. Oh should I tell you this excited things REALLY! You can choose your player between incredible superhero, incredible Super girl, incredible superhero Captain,superhero spider or Rope man behind yellow Mask, which can be used as a unlimited hitting machine shots. You can hit any car & pick any car with hands and throw away lolx. Let’s began party.


Incredible Superhero War battle is one of the best new generation transformer and superhero robot games. Prepare for epic versus-fighting action with your favourite comic Super Heroes & Super Villains in the ultimate cosmic showdown! The gang beasts of offenders appeared in New york city and now they threaten entire population. Act as a saviour of the people.Become the most courageous and fearless hero! Determine the fate of the whole city with the super soldier powers.
Let’s take you on another journey in Incredible Superhero War battle games that gives you the enjoyment of being a superhero rope man and futuristic robots. Full of killer tricks, awesome freestyle action and insane stunts. Use all your fantastic super powers and marvelous strategy to protect the people and the Universe.Start a mortal battle against extraterrestrials and futuristic robots.
Get through the Incredible Superhero War Monster battle in this addictive game. If you love robots, futuristic robot battle, Superheroes robot battle, Monster battle’s, police car roof stunts, limo cars, fun games, superhero games,rope man games, fighting games, police helicopters, army games, army helicopters, futuristic games, survival games, saviour games, police cars, comic superhero games, transformer robot games, and endless games you will love this!

Download this free fighting game and demonstrates how you handle your fists and your skills superhero in a thrilling fight to the death.

Incredible Superhero War battle will be updated according to your suggestions. Don't forget to leave a review with your feedback.