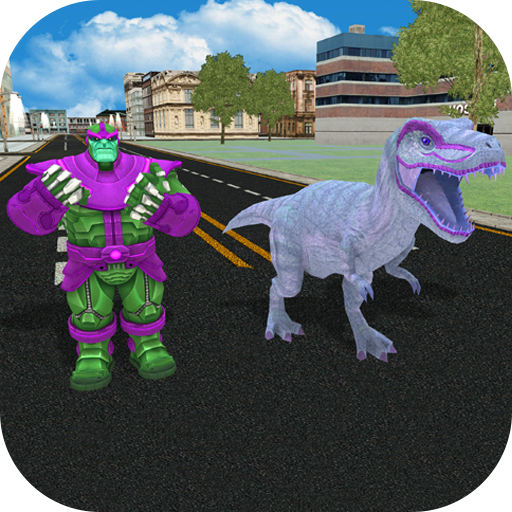 Are you ready for the futuristic city survival and want to become Infinity hero? If yes than show your dominant fighting skills against the evil monsters in Infinity Dino hero City Survival game. Evil robots and ugly creatures are patrolling in the beautiful city. Transform into dinosaurs and defeat your rivals to save the city from these ugly robot and evil forces.

Infinity Dino hero City Survival game especially designed for the city war games and fighting games fans. Become the legend hero and defend your city from the deadly evils creatures with your amazing martial art skills as well as special power attacks. In this infinity dinosaur game, you are the only hope who can protect the grand city from these horrible demons.Flying dinosaurs, more cars now you can chase as giant T Rex!

Infinity Dino hero City Survival is a battle game with full of action and thrill where you are going to play the role of infinity hero that can transform into deadly dinosaur. Deadly monsters and evil demons are your rivals that are destroying the beautiful city. People of the vice city really need a miracle, so take the charge of the city and remove the evil forces with your outstanding fighting skills. Each level of this evil game is more complex than the previous. Defeat your daring rivals with in time to get more score in this dinosaur game so you can easily unlock the other Infinity Dino heroes. Take revenge from these horrible monsters and from the mad robots.Dive in to the new dino hero gaming experience with hours of not ordinary gameplay. Dino Hero City Attack Dinosaur Game 2019 is a city beast attack game and you can also play as infinity Monster Dino to fight with angry Gorilla in Jurassic Real World Game 2019.Play against Dragon lion robot and Deer Crocodile creature in Dino Evulation Game.