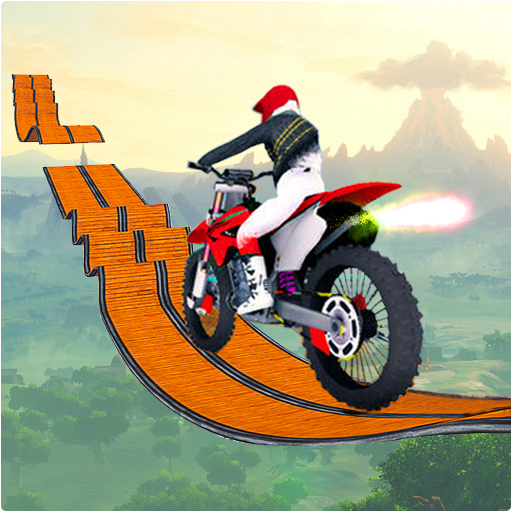 Moto Bike Racing Super Rider 2019
Welcome to real impossible track racing moto 2019 stunt bike games world in which in the air you will have to make real stunts on impossible tracks on traffic in the rush of rider race 3d game bike. For blue sky bike racing, new impossible tracks game 2019 in air has been built. You might have played different bike games stunt racing 2019 like impossible race, bike with amazing stunts, hill track racing, bikeon hill stunts and stunt 3d racing games 2019 but this crazy moto bike wonderful racing game 2017 is addictive, different and interesting among all. For sky racing A new simulation game will pick form earth and drop the bike on-air tracks at the start point of the race. Your heavy indian bike simulator game carefully on adventurous air tracks because Classic & Crazy bike sim stunts on impossible tracks are very risky.
While taking sharp turns on monster air tracks reduce bike speed. To drive 2 wheeler bike game is difficult than driving motorcycle sim, bike simulator in the air on crazy tracks.
It is one of the ever best risky bike racing games you will ever seen. Different kinds of real bikes e.g. highway real racing superbike, modern bikes, luxury 3d real heavy bikes, street racing with new bikes, bikes are available in this racing moto bike stunt impossible track game. While crossing the hurdles you have to slow down or reduce your bike games speed don't over speed motor bike because your level will be failed and you will slip on the narrow tracks and you may fall from the sky tracks into the deep ocean. You have to race your bike on the hill mountains offroad and make real stunts in the mountains just like bike hill stunts game in this moto bike stunt 3d game you will race your bike, reach the destination successfully and cross hurdles carefully to complete the level. To make you expert bike racer and bike stunt games maker thrilling and adventurous levels have been designed.
With new luxury bikes Beautiful realistic environment has been designed in the air and also adventurous tracks full of different kinds of hurdles and other vehicle's traffic. To complete levels and reach the destination you just have to race your real bike, avoid traffic accident and adventurous hurdles in the way. For all aged gamers extremely hard bike racing is here. This game is specially developed for younger and kids also. Younger could make one wheel stunts on the highway roads in real life after playing this kind of bike stunt game. Gamers can learn bike stunts racing and if they are expert then they can test their racing skills by playing this game.
To make it more real for stunt bike racing lovers smooth and realistic heavy bikes controls have been designed. Easy and simple game graphics user interfaces for all types all aged of peoples e.g. technical and non technical gamers.

Just install this moto bike stunt racing impossible track game and enjoy it's features. Give your good feedback after playing this bike game.