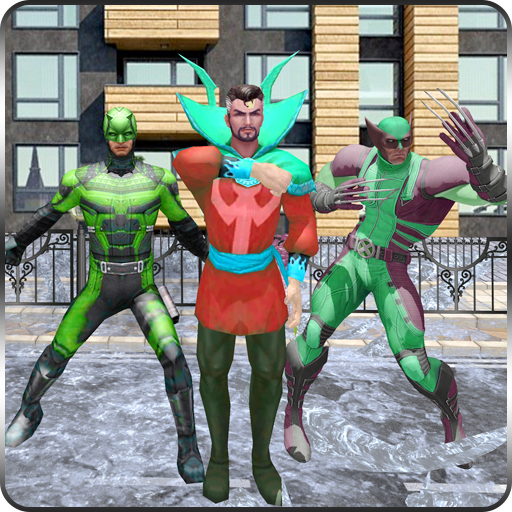 Real Grand Heroes Sonic Fighter 2018 simulator is superheroes fighting game contains the fighting missions against the powerful dead enemies that are patrolling in the grand city. Live the life of the sonic fighter that came into grand city to save the civilians from the curse of the dead enemies. Each sonic fighters having their own attacking skills and variety of special powers attacks. Smooth controls and huge 3D city environment made this sonic fighting game crazier.

Get ready to win back freedom of the grand city from the demon creatures like, half-dead man, beast man, skeleton man, and mummy. In each missions of the Real Grand Heroes Sonic Fighter 2018 game, your four sonic warrior changes according to the city battle scenario. Playing as a strange hero you can defeat your rivals with powerful punches and kicks. Gradually the game play become more complex and the powers of sonic fighters increases. Playing as evil hero you can use special ice shield attack to defeat your rivals as well as with the punches and kicks. Robot hero is ready to smash the ugly creatures with his powerful punches and kicks attack as well as with his extraordinary smoke fire attack. Claw hero can use his powerful claws punches and kicks to fall down the any enemy but his ice fire attack is incredible stunning. However, never forget the rival enemies they also having the devastating fighting skills and power attack like, the beat man can attack upon you with triple fire attack as well as with strange combos. Half-dead man and skeleton having the axe as well as the hammer weapon to fall you down. Show your incredible fighting skills and take stand against the mummies they will smash you with shocking combos. Complete each mission with in time to unlock the other devastating missions. Cool sounds effects and amazing camera angles made this fighter man games addictive.

Enjoy the most entertaining Real Grand Heroes Sonic Fighter 2018 simulator that contains the full of combat missions against the dead enemies. Save the innocent civilians from the curse of dead enemies like, beast man, mummies, skeleton, and from the half-dead man by using your special attacking skills. What are you waiting for? Just grab the free sonic fighting simulator and made blaster entry in the gaming world of Real Grand Heroes Sonic Fighter 2018 game.